I compiled a China Mieville Top Ten a few months ago to mark the TV adaptation of The City and The City. Barker these days is a far less prolific author than Mieville (or even his younger self), so there’s no new work appearing to prompt this. It is, however, his birthday on October 5th so to celebrate that, here’s my utterly subjective ranking of his adult novels. His children’s works (The Thief of Always and the Abarat series) are not, therefore, in this list but are well worth seeking out.

My favourite book. Barker’s breakthrough second novel saw him do the rounds of TV chat shows (including a hilariously awkward Halloween Wogan alongside James Herbert). First time I read it I didn’t like it, to the astonishment of friends who raved about it. I loved the horror of Books of Blood and wonder now if Weaveworld‘s dark fantasy put me off. I liked the concept (and the cover, below), and something must have told me it was worth another go. A second reading made me realise my error. I’ve since bought a hardback copy to protect my signed paperback from further damage. 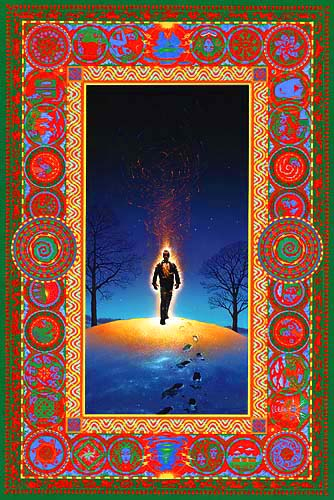 Weaveworld is the story of a realm – The Fugue – concealed from its enemies by being woven into the fabric of a carpet. Unravelled in contemporary Liverpool, it’s up to Cal Mooney and Suzanne Parrish to safeguard the world and its inhabitants – The Seerkind – from those who would destroy them: the “eternal virgin” Immacolata and her sisters, with their sidekick Shadwell, a salesman with an enchanted coat. No synopsis quite does it justice: hugely influential in opening up the genre of “dark fantasy” (Herbert’s Creed (1990) shows its influence in places and you think: “no, Jim, just stick to the gore”) and demonstrated that Barker was ambitious, and capable of fulfilling that ambition.

Short and sharp, in stark contrast to Weaveworld, and published just a year later. Another “hidden tribe” story, this time telling of Aaron Boone, a misfit who has been led to believe that he’s a killer, and so sets off in search of the legendary sanctuary of Midian, where monsters can take refuge from the world. Only it turns out the monsters are actual, literal monsters. Yet as they’re pursued by the forces of law and order, who is truly monstrous?

It’s very short, characters are sketchy to the point of being thumbnails, and you can rattle through it in a few hours. Barker later filmed this as Nightbreed, and I have written about both works elsewhere. I love that it hints at, rather than shows, the wondrous terrors (or terrifying wonders) of Midian.

Huge (so huge, in America it appears in two volumes) and hugely inventive. Where Weaveworld was the Garden of Eden, this is the life of Christ (Christian imagery has always played an important role in Barker’s fiction, yet seems rarely to have been commented on in studies of his work).

This world is one of Five Dominions, sundered from the other four for millenia. The messiah tasked with reconciling them, John Furie Zachariah, aka Gentle, is a dissolute mess, pissing away his talent and doomed to have his memory wiped every few decades. He must assemble his helpers and travel through the worlds, with the forces of reaction on his heels, in order to reveal the true shape of the Imajica.

I probably prefer this to Imajica, truth be told, but Imajica is arguably the better work (partly because it’s self contained, whereas this is the first of an as-yet-incomplete series). The first of Barker’s novels to be set in America, where he moved to permanently in 1990.

It tells us of the battle for Quiddity, the dream-sea that humankind swims in no more than three times in each life. Arch-enemies Fletcher and The Jaff wage a war for the secrets of the dream-sea and knowledge of “The Art” through their children, except those children fall in love. Conflicting loyalties – oh, and Armageddon – then threaten a Californian town with buried secrets.

Barker coming out as gay in the early 90s was a brave decision, and his publishers were nervous about this novel having a gay central character. Will Rabjohns is a wildlife photographer whose life changes after a near-death experience. He is flung back to visions of his childhood and time spent with two mysterious, seemingly immortal travellers, themselves bent on witnessing the deaths of the last representatives of animal species. A powerful, visionary, fever-dream work echoing millenial (and post-millenial) fears of environmental collapse, it sold well beyond the fears of his publishers, proving that who a character chooses to sleep with really doesn’t matter. One of his lesser-known works, but one of his best.

You know Hellraiser already: this is the novella that birthed it. Frank Cotton uses a magical box to unlock the doors of a world of unknown pleasures. Except that domain’s definition of pleasure isn’t necessarily the same as ours. A highly original take on the Faust legend (see below), the Cenobites were a new breed of monsters that tapped into a late 80s S&M zeitgeist. Pinhead (never named as such), great a character as he is, suffers by over-exposure in the film’s many sequels. Here, and in the original film – like the xenomorph in Alien – less is more. You could read this in a rainy afternoon, and you should.

This is good fun, and perhaps languishes so low in this list because I came to it late. Fading actor Todd Pickett emerges from plastic surgery to find devastating results, and takes refuge from the world’s media in a mansion in the eponymous canyon. The mansion, though, has secrets. Once the home of a silent movie heroine with bizarre tastes, it contains a room whose tiles – from roof to floor – depict a savage medieval hunt. Is that a trick of the light, or do the pictures move?

Barker’s first novel, speed-written to capitalise on the unexpected success of the Books of Blood. A re-telling of Faust, Marty Strauss is released from prison into the employ of Joseph Whitehead, a wealthy industrialist whose deal was with an all-too-human devil. Time to repay the debt, but Whitehead is not willing.

Probably the most dated of Barker’s work, and much more of a thriller than either his previous horror or later dark fantasy. It tries to be all three and doesn’t quite manage, but is perfectly readable nonetheless.

Or, “The Second Book of the Art”, i.e. the sequel to The Great and Secret Show. Quiddity is still threatened, and the veil between our world and that one is thin. Everville is another town with secrets, a crossroads of America at which opposing forces will meet.

Although it has flashes of brilliance and some truly memorable characters, for me it fails to do what The Empire Strikes Back did in making the dark midpoint of a trilogy be the strongest part (though this particular trilogy is still unfinished). Barker was brave with some of the decisions he makes in this book: who lives and who dies, and how happy-ever-after are happy-ever-afters? But, equally, some parts are unconvincing. The shores of Quiddity in particular seem much more drab and mundane than any wonders we’d been promised and make you wonder if the battle is worth it in the end.

I like the idea of this: that there’s an actual devil hidden inside the pages and the binding and the words of the book in your hands. Jakabok, the devil in the detail, is a nasty little bastard but one who spins a good yarn. Perhaps this needs a re-reading; I was disappointed in it at the time and have felt no compulsion to revisit. Unlike any of his other novels, it feels inconsequential.

What it shares with The Scarlet Gospels, and which for me is a problem with both books, is a literal depiction of a Christian Hell. I have no problem with the idea of Hell; I love Dante’s Inferno, medieval depictions of its terrors and denizens, and look forward to the forthcoming Penguin Book of Hell. Indeed, one of Hellbound: Hellraiser 2‘s good points was it’s depiction of Hell as a set of endless corridors. Hell is a fascinating concept but one that, as the location or source of ultimate suffering, should almost be ineffable, or at best rendered in the abstract. In neither this nor The Scarlet Gospels does Barker manage to make it seem anything but grey and – at worst – merely unpleasant, rather than truly Hellish.

“But wait”, I hear you cry. Where the hell are the Books of Blood? Well, they’re short story collections not novels, and ranking them individually would edge many of these novels out of this chart. Critical opinion seems to favour volumes 4 to 6 but I love them all.

So what didn’t make the cut?

Along with Mister B. Gone, the only one here I’ve not read more than once and which retains only the barest imprint on my memory. Barker’s most un-usual (or rather, atypical) work, subtitled “A Romance”, Galilee is a dynastic epic, telling of the ongoing feud between two powerful families: the Gearys and the para-human Barbarossas.

And that’s about all I recall, other than some (typically) bizarre sex.

The sharp-eyed among you will have noticed what is hopefully not going to become a pattern: Barker’s most recent novel is not in the top 10.

This had a long and troubled gestation; seemingly editor Mark Miller trimmed its length considerably prior to publication. It has a few great set-pieces: the introduction, in a crypt in Germany where Hellraiser’s lead Cenobite (called Pinhead in print for the first time) appears, is stunning. Harry d’Amour (previously seen in The Last Illusion1 and Everville) is a likeable hero, and Barker’s prose is as elegant and rhythmic as ever. But there is so much wrong with this novel. As above, the depiction of Hell seems curiously under-imagined. The characters wisecrack like a poor Hollywood movie, and make cringeworthy (and un-Barker-like) double entendres. There is also the trope of the Magical Negro in the blind medium Norma. I got the feeling that Barker had lost his way, and was relying on outside assistance to help him envision a novel for the late 2010s. Some of this may be down to the horrific health problems he’s suffered in recent years (and thankfully appears to have overcome).

Nonetheless, I retain high hopes for the Third Book of the Art (firstly that it will ever appear, secondly that it’ll be good); for the remaining volumes of Abarat; and for any of the works in the “Upcoming” section of his website.

1 Filmed by Barker himself in 1995 as Lord of Illusions with a charismatic portrayal of d’Amour by Quantum Leap‘s Scott Bakula.

More Clive Barker at Into the Gyre: