The plen-an-gwarry (or plain-an-gwarry) is where several of my interests collide: early modern drama, Cornwall, (more or less) ancient sites, and language.

What are they? The plen-an-gwarrys are circular earthworks – amphitheatres – where, among other communal events, medieval dramas were performed. These would have borne a resemblance to the contemporary English passion plays and morality plays (such as Everyman), but were in the Cornish language which the majority of the population of Cornwall then spoke. Few of these dramas survive now.

The name is Cornish for ‘Playing Place’. I mentioned them briefly in a previous post about ancient stones in Cornwall. The plen-an-gwarrys are nowhere near as old as the standing stones, burial chambers and fogous of west Cornwall, but are every bit as evocative.

Additionally, they provide a link between medieval Kernow – and the language spoken there – and contemporary Cornwall. There are two complete ones still extant: Perran Round, outside Perranporth, and the beautifully maintained one at St. Just-in-Penwith (top). The existence of village names such as ‘Playing Place‘ speaks of plen-an-gwaris (the spelling is variable) now lost. This lovely crowdfunded map shows the location of these historical arenas across Cornwall.

I paid a recent visit to Perran Round (having been to St. Just last year). It’s a mile or two outside Perranporth: there’s a lay-by for parking but it’s easy to drive past without realising a significant icon of Cornishness lies just the other side of the thin screen of trees.

The circular shape obviously lends itself well to performance. Coincidentally – or not – it would have fostered an atmosphere of inclusion (and simultaneously, the obverse: excluding all that is not within). Compare the shape to the later (1700s) Gwennap pit near Redruth, where fevered Methodist services took place.

Perran Round, being outside the town, is more atmospheric than St. Just. I don’t know the relative sizes, but it felt the bigger of the two, perhaps because of the lack of buildings to scale it against.

So what were these plays the medieval Cornish gathered to enjoy? Among the few works of Cornish literature to still exist is the Beunans Meriasek (‘Life of St Meriadoc’, also known as The Camborne Play). This is one of what Bernard Deacon calls “localised saints’ plays”. Each village, possibly with its own playing place, certainly had its own patron saint (Meriasek being Camborne’s) whose life and works were celebrated in performance.

The most famous surviving Cornish drama is the Ordinalia. This dates from the late fourteenth century and is comprised of three mystery plays whose acts span the Bible from the creation to the resurrection¹. The dramas, writes Deacon, were performed on “three consecutive days…a mixture of holiday, entertainment and get-together”.

Philip Payton argues² that Beunans Meriasek with its belief that the “duty of the State is to defend the Church and to avenge its representatives” would have been “politically incorrect” after the Reformation, “subversive” and “a vehicle for Cornish sentiment”. Even before Henry VIII and the phasing out of Catholicism in England, it’s arguable that the play was subversive anyway because it reflected Cornish attitudes towards the “tyranny” of the English throne. Payton describes the Tudor dynasty’s “British project” which aimed at centralising power and uniting the disparate parts of the British Isles (an “intrusive English state that was less and less inclined to make allowances for Cornish difference”). For instance, the legend of King Arthur as a king of Britain was useful to the Tudors as a means to “claim” Cornwall, given that the legends have him born at Tintagel. Simultaneously, the Cornish had for many years clung to Arthur as a means of defining themselves against England: as part of their Celtic past, Arthur (and the Bronze Age megalithic paraphernalia) implied that the Cornish were “more British than the English”: the original Britons. It’s the type of argument that, while containing historical truths, today could be used to justify deeply unpleasant beliefs.

The Reformation was a disaster for the Cornish language. Hitherto, Kernow was a Catholic count(r)y and the links with Catholic Brittany were strong: there was a long history of migration between the two regions, and their languages were mutually intelligible. After the Reformation, as Cornwall became more closely integrated with England, Catholic Brittany/France were treated with suspicion as an enemy. The Cornish language, whose most public, most visible works were dramas which were distinctly Catholic, was similarly tainted.

Bernard Deacon notes that “unfortunately, unlike Welsh or Irish, there [wa]s no parallel secular literature or poetry…the language was dangerously over-dependent on religious topics and church policies”.

Philip Payton lists other reasons the now-vulnerable language lapsed, which included “the dismissive attitude of the gentry” (bought off by patronage in the time-honoured tradition of the British State), “contact with outsiders” as a result of trade (although arguably this had always been a feature of Cornish life), the “lack of a Cornish Prayer Book” and – the final nail, surely – the “failure of people to correspond in Cornish or to preserve Cornish manuscripts.”

By the start of the 17th century, the plays had been stripped of religious significance and “had become chaotic parodies for the amusement of simple country folk”. By the end of the following century – the exact date is difficult to establish – it’s likely that at best only a handful of speakers survived. 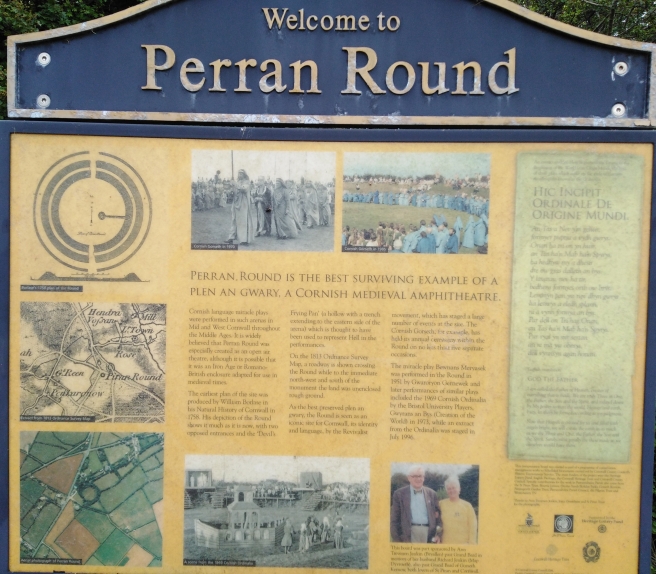 What of Cornish today? It’s been called dead because unlike Gaelic or Welsh no-one speaks it as their first language. But a language need not be spoken in order to live. Many place- and surnames are Cornish-language in origin (even if subsequently anglicised). The language – even if in shards – is therefore still spoken on a daily basis. There’s a well-worn saying that “by Tre, Pen and Pol you’ll know a Cornishman” and that holds true: each of those prefixes is a Cornish root, in common use today.

There are arguments against “reviving” the minority languages of these isles: the efforts to widen the use of Gaelic is a frequent target within Scotland: there is (for instance) Gaelic signage in the Lowlands nowadays where historical use of the language is disputed. There is also ongoing controversy when English residents in Wales change (for instance) the name of their house to English from the Welsh. Understandable, on their part: they want a name they can understand (or pronounce); but offensive to the locals on several levels. These Celtic languages and their place names offer a view of history, of associations, of attitudes and a way of seeing the world that the English language, for all its flexibility, does not allow. Even if we do not speak a word of them, the world, and our capacity to understand it, is poorer for their erasure.

There has been a long battle – outwith the scope, or the tolerance, of this post – within the larger battle to revive Cornish, to decide which “version” of the language should be brought into use in the 21st century. The two main contenders each have valid arguments: one side argues that the Cornish as used by the last native speakers – the most recent – is logically the version which should nowadays be taught, added to road signs, etc. The other side argues that because we have such little written evidence of that version, the earlier Cornish used in the medieval dramas should become the revived language.

Perhaps surprisingly, it’s this latter side which has won. By way of compensation, because it was the area in which the language was spoken most recently, the accent of west Penwith has been used to define how the revived language should be pronounced.

As for the plen-an-gwarrys, today Perran Round (as the photo shows) is a protected monument. During the world wars, both Conservatives and Liberals used it for political rallies, and it has been used several times by the Cornish Gorsedd. In St. Just, the plen-an-gwarry is used during the annual Lafrowda festival in July, and the mystery plays – themselves revived – are once again performed.

¹ A translation of part of the third play (‘The Death of Pilate’) is included in the edition of Everyman edited by A.C. Cawley.

² Philip Payton’s superb Cornwall: A History – highly persuasive in its treatment of Cornish history as being distinct from English history – covers this in depth.