I was in Brussels recently for a family holiday. Lovely city; highly recommended. Anyway: we visited the Atomium. You might not know the name, but you know the image: “the steel balls”.

As a piece of architecture, from afar it looks like a toy; one of the many pieces of tat on sale in the shop: a keyring, a snowglobe, a paperweight. Up close, though, it becomes something else. When you’re used to tall buildings being rectangular in profile – giant cuboids, essentially – the Atomium is indescribably strange. It hangs above you; it projects beyond you; there are gaps; the spheres seem insufficiently supported. It’s almost unsettling, but I liked it very much.

The shape is that of a cell of iron (9 iron atoms), magnified 165 billion times. It was built as the centrepiece of the 1958 Brussels World Fair: “Expo58”. This year is the 60th anniversary, and there was an exhibition across several of the spheres. I bought the official anniversary “album”. This being Belgium, it was a bande dessinée [BD] or stripverhaal: a comic, available in Dutch or French.

As it happens, a few days after our return I found some BDs in my local library: alongside the usual Asterix and Tintin was Blake and Mortimer, written by Herge’s friend and fellow Belgian, Edgar P Jacobs. One of these – this one written after Jacobs’ death, by Yves Sente and André Julliard in 2003 – had the (more dramatic) cover below.

Two comics with the Atomium on the cover? Too good a coincidence to miss. How would they treat the building? What would it signify within each work? What had the building signified in 1958, and what now?

National Expositions were an exercise in soft power. Countries would occupy national pavilions, the contents and exhibitions of which demonstrated the technological (and, later) cultural advances of that nation. During the Cold War, this meant a game of one-upmanship between the U.S.S.R. and the U.S.A. That’s the backdrop to both comics: Sputnik 1 had been launched the previous autumn; the Soviets had moved the game into space.

Expos are still held, but lack the hold on the imagination that they once had: the most famous comic portrayal of an Expo is the 1893 Chicago World’s Fair in Chris Ware’s Jimmy Corrigan, which shows the popularity and attraction of such a huge event.

Expo58’s motto, with the war still fresh in the memory, was “a new humanism”. Glimlach58 has appendices explaining the Fair to a 21st century readership, describing a “blind belief in progress”: a belief we no longer seem to have. Things are invented and constantly updated, but to what extent this is improving the quality of life for the bulk of humanity is debatable. By contrast, “technological humanism formed the heart of the fine utopia” (my translation) in Brussels. At the same time, Belgium was undergoing “modernising of infrastructure and communications”1.

The Expo was “opened by the King in a spirit of harmony and progress” which may sound anodyne to modern ears, but so soon after the war such words carried weight. Expo as peace broker? Paradoxically, the explicit division of the exposition by national pavilions created a sort of neutral space, or at least a sublimated form of warfare.

Glimlach58 (written originally in French as Sourire58) is a fairly straightforward espionage story. Kathleen van Overstraeten is one of the hostesses of the Expo, one of a few hundred women employed to help VIP and public alike in their exploration of the site. The “smile” of the title refers to the expression they were expected to maintain at all times, in order to provide a welcoming presence. 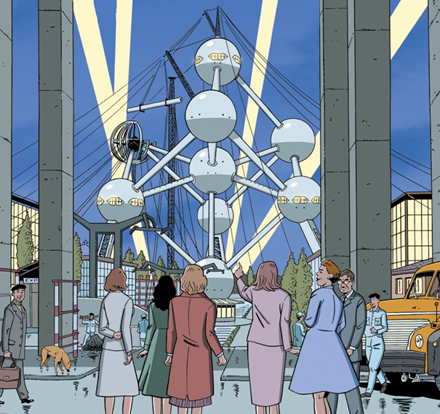 Kathleen finds herself caught up in a series of plots which aim to sabotage the Expo; her actions lead her to fall foul of her supervisor, the strict Madame Devriendt, which only serves to heap suspicion upon her. Slowly Kathleen realises that she’s being framed, and the (over) friendly men she has met are not what they seem.

The strip contains plenty of nostalgic signifiers for Belgian readers: pop star Annie Cordy, King Baudoin, and a beautiful illustration of the still-recognisable Brouckèreplein / Place de Brouckère (below). And nostalgia is one of the keys to this. The book celebrates what it posits as a more innocent time, yet the world faced a constant threat of global thermonuclear warfare. Nostalgia for the Cold War is not new, and is no longer surprising: today we see its threats as stable and known, in contrast to our own times. But nostalgia for such an age can only exist because we know how it turned out. We’re still here to re-tell the tale.

There is evident pride – no doubt felt at the time, and reflected through the strip – at Brussels’ position as focus of the world’s attention. This was, after all, a huge event (40million+ visitors, including 80% of the Belgian population); a dry-run, possibly, for Brussels’ modern-day role as the heart of the European Union.

The strip’s denouement, naturally, takes place within the steel cubes of the Atomium. It’s ironic that a design which is timeless should look so 1950s. Perhaps it’s the shiny metal – nothing says 50s like reflecting chrome surfaces – and the thrusting pipes. I like that this building, which has become the symbol of Brussels, is something universal.

Aside from the political backdrop to the Expo, what was happening culturally? 1958 was the real beginning of the nouvelle vague – the French New Wave in cinema – with Louis Malle’s Ascenseur pour l’échafaud (with a sublime Miles Davis soundtrack) and l’Amants, both starring Jeanne Moreau; and Claude Chabrol’s le Beau Serge2.

More pertinent to the Expo are Alain Resnais’ short Chant du Styrene (a paean to the marvel of plastics, shot in glorious colour) and especially Jacques Tati’s wonderful Mon Oncle, which satirizes exactly that type of modern design, technology and “progress” being fêted in the Heysel plaza.

1958 also saw Marguerite Duras’s novella Moderato Cantabile, a high-point of the French nouveau roman about which I have written much elsewhere. Interestingly, given Belgium’s appalling record in colonial Africa, it was also the year of Chinua Achebe’s Things Fall Apart.

Blake and Mortimer are also a product of their time. What that means is that they are rip-roaring3 John Buchan-type patrician spy stories, which feature no women (unless as servants or glamorous passers-by) and whose concern is the upkeep of the status quo. That said, the books are lots of fun and their vaguely SF storylines add a degree of colour.

The Sarcophagi of the Sixth Continent, written half a century after Jacobs’ original strips, gives us the backstory of the two characters (Francis Blake is a soldier and Philip Mortimer a scientist). A figure from Mortimer’s youth in British-occupied India returns, allied to the pair’s nemesis Colonel Olrik, in a plan to create havoc at the Expo – centre of the world’s attention – and develop a weapon which will shift the balance of power from western colonial nations. The narrative treads a fine line: the 21st century authors sympathise with African countries’ independence movements, but this sits uneasily with the series’ core ideology: the maintenance of the Western Establishment that our heroes represent, which abhors the end of colonialism.

The Expo – not yet opened in the story – will, like Glimlach58, be the target of the baddies’ nefarious plan: presumably the most eye-catching and public place on earth at the time. The Atomium has only a cameo role: the building and the cable cars which ran from it are briefly electrified, with disastrous consequences. It looms in the background like a sentinel.

Glimlach58 has antagonists on all sides; a shady cabal, whose identity is never known, sets the plan in action. This creates a moral ambiguity. By contrast, in Blake and Mortimer, the western Cold War bias is evident: the U.S.S.R. is complicit in the plot.

Blake and Mortimer are stuck in a pre-1960 world. Their adventures are unimaginable in the era of (the cinematic) James Bond. Two years later, the Berlin Wall was raised, and as the appendix to Glimlach58 says, the dream of a united world was “a lost illusion”. The Atomium is one of the larger remnants of the lost future the 1950s promised. It stands like a messenger from an age more hopeful despite the nuclear threat. Should we feel rebuked in its presence? Ashamed that we haven’t lived up to its aspirations? Maybe, but the structure speaks of deep time, and reminds us that our squabbles and threats have ever appeared and receded and taken new forms. There is still time.

Sente, Yves and Julliard, André: The Sarcophagi of the Sixth Continent (Cinebook, 2011)

1 This meant asphalting roads which were previously cobbled; a move which, though certainly aiding motor travel, caused problems for the immensely popular professional cycle races in the country. Smoother roads meant less of a challenge; consequently, back roads and farm tracks whose cobbles were untouched by asphalt were sought after by race organisers in order to make the races tougher, thus giving the Flemish “Spring Classic” races the form they still have today.

2 British films of that year include Hammer’s original Dracula, the war classic Ice Cold in Alex and, er, Carry on Sergeant. Jeanne Moreau or Hattie Jacques?

3 A phrase only ever used for adventures of this type.