Welcome to the second in my occasional trip back to the 80s Horror Boom. Having looked at Mark Morris’s excellent Toady, we’re now going a little further back in time – and a little further north – to look at three books from 1986-7, all of them set around Tyneside and Northumberland: Stephen Laws’s The Wyrm and Spectre, and Ian Watson’s The Fire Worm.

The Lambton Worm is a well-known part of North-East England’s folklore, and I bought The Wyrm and The Fire Worm because both riff on the legend. If I expected them to be at all similar, however, I was in for a big shock.

The Wyrm was Newcastle writer Stephen Laws’s third novel, following Spectre (of which more anon) and his debut Ghost Train. Laws writes good old-fashioned 80s pulp horror such as you just don’t get these days (though that’s not necessarily a bad thing).

Thriller writer Michael Lambton has moved to the Northumberland village of Shillingham to recover from a breakdown he suffered during the writing of his most recent bestseller. The villagers are close-knit, and suspicious of him. He keeps himself to himself, which does nothing to endear him to them. Farmer’s daughter Christy Warwick makes friends with him. Her father is the troubled Frank, guardian of an ancient secret. A new road development means the macabre local attraction that is a medieval gibbet has to be unearthed. Frank knows that doing this will unleash something that’s been buried for hundreds of years.

Sure enough, it does, and blood is spilled. Lots and lots and lots of blood. Michael and Christy must battle evil: the eponymous Wyrm has shut off Shillingham from civilisation and is using the town as an hors d’oeuvre before it plans to wreak havoc worldwide. 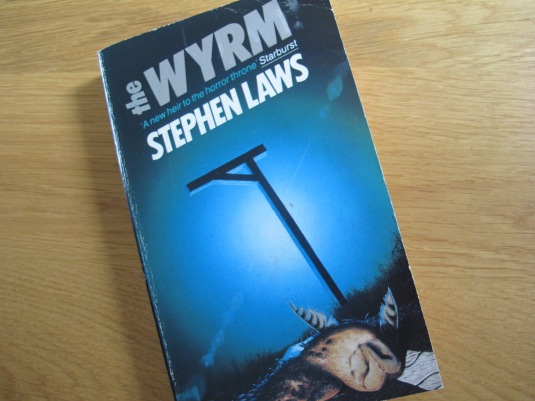 The Wyrm is a fast-paced, increasingly claustrophobic little horror story. How well does it hold up, more than thirty years on? Hmmm. In its favour, Laws writes decent prose, and it’s one of the best page-turners I’ve read this year. He also narrates action sequences expertly.

The prologue, in which an inquisitive writer hopes to get the gen on the recent Shillingham weirdness from a first-hand witness (whose identity later becomes obvious, though isn’t revealed until the epilogue), offers us a metaphysical perspective that the rest of the book fails to live up to. “This world of ours…our reality…is at the intersection of a crossroads”, it begins, like something from early Clive Barker. But by the novel’s climax, we’re reduced to horror cliches such as the “sanctity” of a Christian church.

There’s a subtle cruciform motif running through The Wyrm: the gibbet is at a crossroads, so that souls of the hanged don’t know which direction to take after death; and Shillingham itself is a sort of crossroads, situated in the debatable lands that have switched from being Scottish to English over the centuries.

And what of the secret that Frank guards? As the last first-born male Warwick in the family, he fears the future, and can’t consider that his daughter could take on the role. Naturally, she can and does. The secret is “The Book of the Wyrm”, a 17th century volume telling the story of the last time the Wyrm rampaged through Shillingham, and how it was trapped – impaled – beneath the gibbet. The medieval text is delightfully creepy, with Lovecraftian touches (mention of a “Narlatonep”) and would make a good short story on its own. Arguably, it’s the best bit of the book, transcending much of what surrounds it.

For instance the dialogue throughout leaves much to be desired. Weirdly, Laws seems to almost entirely refrain from using swear words in situations where you’d expect them to be scattered like bird-seed, so until very near the end there’s only lots of (very dated-sounding) “bloody” and “sods”.

But the book’s greatest horror is the prevalence of middle-of-the-road, yuppie guitar-wank favourites Dire Straits. Michael loves them, especially their early, late 70s work. In the most incredible (as in “not credible”) scene in the entire book, Christy – a teenage girl desperately trying to fit in with the cool kids – gushes her love for them, particularly the song “Sultans of Swing”. Sorry, but no. Laws may love Dire Straits – fair enough – but no aspiring cool teen in 1987 would listen to them: music for their parents.

Ian Watson’s The Fire Worm is a very different kettle of, er, wyrms. By the mid-80s Watson was a veteran author, best-known for his sci-fi novels. The Fire Worm, though packaged as a typical piece of 80s pulp horror, is something far more complex and sophisticated: but also far less visceral and terrifying.

John Cunningham is a psychiatrist, experimenting with his subjects by using hypnosis to  discover their past lives – something he refuses to believe in even as he practises it. But his findings point towards a common mythology underlying different incarnations and, as his alter-ego, horror author “Jack Cannon”, he writes (or embellishes) the experiences his subjects undergo while hypnotised. What we read, in the novel, as historical episodes are therefore the experiences of patients, recited to Cunningham, re-written by “Cannon”, and posited by Watson as occupying the same narrative level as that of Cunningham’s own story: his problematic co-existence with his patients’ stories. Told you it was more complex than just a big fuck-off worm.

Cunningham’s a manipulative bastard who, as our narrator, becomes increasingly disturbing as he gets sucked into his findings. Though he doesn’t initially believe people can have previous lives, his own life is split rigidly in two: his two sides (Cunningham and Cannon) are kept apart, nobody knows that Cunningham is Cannon, and the two personas even argue with each other.

It turns out that as we delve deeper and deeper into previous incarnations, and with each one we go centuries further back, that the legend that’s being uncovered is the Lambton Worm. Whereas Laws’s wyrm was a thing evil in essence, Watson’s worm has its source in a salamander – “an elemental creature which lived in flames and was not consumed…rather was nourished” – and is a produce of alchemy, and therefore if it’s at all evil it’s a man-made evil.

The Fire Worm seems set in a “future 80s”, where the concerns of the middle years of that decade have become more pressing and amplified. AIDS features heavily, and the 14th century alchemical process which the worm escapes is described as a “medieval Chernobyl”.

It’s a multi-layered work: a deeper and richer and better-written book than The Wyrm, but as a piece of horror less satisfying, even though it’s creepy in its own way. In contrast to the extracts from the fictional “Book of the Wyrm”, the sections in The Fire Worm set in the past become increasingly long and, well, dull. It’s much less gripping, and also much slower, than The Wyrm though as I hope I’ve shown, the similarities are really only skin-deep.

Leaving wyrms aside we come back to Stephen Laws, and a more urban horror. Spectre is set not just in Newcastle, but very specifically the Byker area of that city where Laws grew up. In an interview with the November/December 1988 issue of FEAR magazine, he describes his first three works as “a kind of unofficial Geordie trilogy” and admits “a lot of the work in the books is a kind of exorcism of things from the past which are still a bit painful” which obviously adds a bit of spice to the goings-on in Spectre.

Seven teenagers in 70s Byker are a gang – the Byker Chapter. A decade later, all have gone their own way, but now something is picking them off in a very bloody manner. Richard Eden is our hero, the only one of the Chapter to have stayed local, and he’s drinking his evenings away in the Imperial nightclub. But weird things are happening in the nightclub, right under his nose – or rather above it, because the upstairs offices of the nightclub are the home of the evil that’s gestating.

There are parallels with Stephen King’s IT – a gang of kids are menaced by something from their past, and must bond together once more to fight it. As with King’s epic, there’s the problematic issue of the gang featuring a lone female who all the males have sex with. IT and Spectre came out at roughly the same time, so the similarities are coincidental. A more obvious borrowing is from Back to the Future. Richard has a photo of the Byker Chapter in the last days before they split, and as the members are killed, they fade and disappear from the photo – and from all copies of the photo – just like Marty’s siblings vanish from the snapshot in the film.

Again, the dialogue’s a bit wooden, and the characters are painted in broad strokes to minimise, seemingly, the chances of them blurring into one another, so insubstantial and one-dimensional are they. Also notable¹ are the character names. To take examples from Laws’s contemporaries Clive Barker and James Herbert: their character names are distinctive, albeit in different ways. Barker’s characters often have names that are unusual – obscure, even – but still plausible: Jeudwine, Shadwell, Mahogany. In Herbert, his heroes are generally only referred to by their forename once, and thereafter by surnames which are very “solid” sounding: Harris, Bishop, Ash. Laws’s characters have names which are so everyday they border on the unlikely, and certainly the unheroic: Richard Eden, Phil Stuart, Derek Robson. Division Two footballer names.

Anyway, once again there are some good action sequences in Spectre, and some fine grotesque imagery. What doesn’t sit quite right though are the book’s excursions from Tyneside. The heroes make an overnight car dash to Liverpool, which could be anywhere, so blandly is it drawn. And there’s a trip to Mevagissey in Cornwall that’s so brief and random I wondered if Laws had maybe been on holiday there once and thought “I can use this place”, and then somehow managed to not quite do so.

But this novel’s true horror – can you see where I’m going here? – is the prevalence of middle-of-the-road, yuppie guitar-wank favourite Eric Clapton and his song “Layla”. However, to be fair, unlike The Wyrm‘s Christy, a gang of teenagers in the 70s – grown men in the 80s – would quite conceivably be fans of Clapton, so I’ll cut Laws some slack.

What else was going on in Horror at this time? Well, looking back 1986-7 is probably peak Horror Boom. On the cinema screen, there was a glut of great and not-so-great-but-just-as-fascinating films: Aliens, Cronenberg’s The Fly, Hellraiser, Rawhead Rex, Maximum Overdrive, Critters, Evil Dead II, The Lost Boys, and Predator. In print we were just as spoiled: Weaveworld, IT, The Magic Cottage, The Hungry Moon, Tread Softly, The Tommyknockers, and the first few books from splatterpunk enfants terribles, John Skipp & Craig Spector.

It must have seemed like it would never end, but 1986 also saw the release of the first cinematic outing for the figure who would almost single-handedly spell the end of the Horror Boom. Michael Mann’s Manhunter, featuring Thomas Harris’s charismatic serial killer Hannibal Lecter (portrayed here by Dundee’s finest, Brian Cox), was followed in 1990 by the more famous Silence of the Lambs: hereafter, dark crime thrillers stole much of the horror audience as readers moved from the supernatural to the darker recesses of the human psyche.

¹ Thanks to my friend Will for highlighting.