I love Weird Walk. I’m not being paid to say that, nor have I been sent a copy for review. I say it freely: there was a small, quirky-and-friendly zine-shaped hole in my life that I’d never noticed, and Weird Walk fills it perfectly.

It’s been a funny old year – a weird one indeed – for walking. We were restricted for months to our immediate locale, which may at first have seemed like a form of imprisonment, but for me and perhaps you too, on the contrary it opened up new pathways I’d never taken, let me spot links between routes or areas, and made the small corner of the world I inhabit seem a larger and richer place.

So what does the post-lockdown Midsummer 2020 issue hold?

There’s an interview with Ben Edge, a contemporary folklore painter whose neo-primitive work has an eerie quality that’s not just a product of his subject matter.

We have more on acid folk: a handy primer for further explorations. As someone whose entire knowledge of vaguely folky-prog rock encompasses some Steve Hillage and Gong albums, this was fascinating.

Loney author Andrew Michael Hurley is the subject of this issue’s centrepiece interview, and just like Benjamin Myers last time, it makes for deeply interesting reading. He talks about walking as pilgrimage; as a way of knowing the land; and as a way of getting lost. “It’s the places that are unwalked that are most unsettling”, he says. no sign of humanity [cornwall] 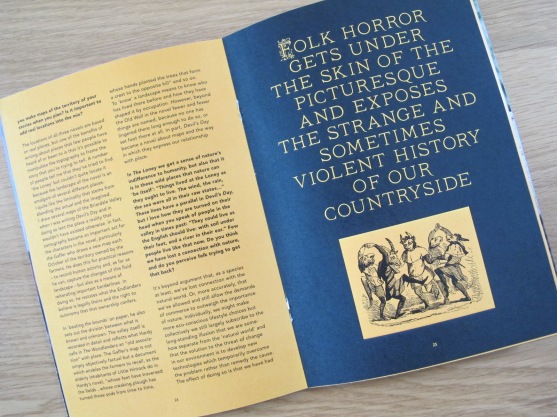 The second part of Stephen Dowell’s ‘Being a Short History of Flat Roofed Pubs’ psuedo-fiction, or psuedo-history, gets increasingly creepy as it takes us on a walking tour of a post-war housing estate, the pubs therein, and the dark secrets they hold.

This issue’s actual weird walk is along the Thames and Severn canal. Joining England’s mightiest rivers, the walk wanders past the source of the Thames which, according to Peter Ackroyd “is the place of enchantment, where the boundary between the visible and the invisible realms is to be found”.

A full 6 pages are devoted to the “folklore of booze” – from Viking legends to English hop-lore – which I thought was overlong, especially given that it’s only “Part 1”.

We close with tour around the beautiful Uffington horse, an area well drenched in mysteries, where the more you see the less is known. I’d have liked this article to have been a bit longer and in more depth, perhaps at the expense of some of the booze folklore.

Nonetheless, reading Weird Walk again makes me wish I was in the West Country, but I’m reminded of what Alain de Botton says in his How Proust Can Change Your Life. In response to the hordes who visit Illiers-Combray and (presumably) fail to be as enraptured as was young Marcel, the key is not to look at their world through your eyes, but your world though their eyes.

Thus even though I, and no doubt many of their readers, live hundreds of miles from the areas their walks cover, it doesn’t matter: you can walk weird wherever you are.