Clive Barker’s 1988 novel Cabal is short: at 253 pages, padded out by chapter breaks and illustrations, it’s practically a novella. After the effort of writing the 700-odd pages of Weaveworld, this was a refreshing length for the author:

“One of the interesting things about going to Cabal after [Weaveworld] was that I found a new size which I’d never even tackled before, about 250 pages long. It’s the right size for the novel. I think you’ve got to allow stories to occupy the length that they need to occupy.”(1)

Cabal is about the misfit Aaron Boone. Deceitfully persuaded by his shrink Dr. Decker that he is a serial killer, he flees to the legendary Midian, refuge of the outcast. Once there, he is attacked and bitten by one of the inhabitants, a bite which gives him a strange life-in-death following his subsequent murder at the hands of a police force roused by Decker, who has followed him. Boone becomes one of Midian’s denizens, the Nightbreed: monsters and freaks who have built a city to hide themselves from mankind’s eyes. But Boone’s lover Lori, retracing his final steps – and who believes him dead – finds him and in doing so unmasks Decker as the true serial killer. This exposes Midian to the local rednecks, who set about destroying the refuge. As the Breed die or flee, Boone, responsible for the loss, is anointed by the city’s deity to become the Breed’s saviour and build another Midian.

I’m not averse to reading a thumping great epic (my favourite Barker and Stephen King novels are Weaveworld and IT, respectively), but I like the fact that a world can be created and a story spun with what amounts to little more than gestures. Cabal delivers a brief, very satisfying rush, and though Barker planned at least two sequels I don’t think we’re imaginatively any the poorer for not having had them yet. Boom! Studios have produced a follow-on comic which takes the vignettes that appeared in Clive Barker’s Nightbreed Chronicles (1990) and built them into back-stories. Fun to read, but I got the feeling I get when approaching the Star Wars Expanded Universe: the sensation of gaps being plugged, the spaces filled out and all the air removed.

We don’t need every detail; we can survive on a hint of greater depth:

“I wanted to do the reverse of what I did in Weaveworld which was to really cross the t’s and dot the i’s, give every detail of psychology and so on. In Cabal I wanted to present a piece of quicksilver adventuring in which you were just seeing flashes of things, Boone, Lori, the Breed, each character’s psychology reduced to impressions. The reviews for the book split into two camps. One was those people who enjoyed Weaveworld in all its detailed 700 pages and thought Cabal was too perfunctory, and the other camp thought Weaveworld was too large and enjoyed Cabal because of its speed. You can’t please all of the people all of the time, but I never set out to make Cabal a work of Weaveworld’s depths.” (2)

The key word here is “impressions”. There is a scene early in Cabal in which Boone is held at knifepoint in a graveyard by two of Midian’s inhabitants. In Nightbreed, the uneven 1990 movie version of the book, these characters have been – by necessity – sketched out and designed and cast and made-up. “The fantastical elements in the book… are rather impressionistic. But you can’t do that in a movie, people need to see what these guys actually look like.” (3)

In Cabal one of these characters – Peloquin – is described in the vaguest of terms:

“a large beast, its species impossible to read…the head…was not solid; it seemed almost to be inhaling its redundant features…there were human features beneath, set on a body more reptile than mammal”

The man holding Boone in the novel is named “Jackie”, but in the film is the crescent-headed Kinski. The description of Jackie is transposed in Nightbreed to the background character(s) Otis & Clay, whose physiognomy in the days before CGI would have been difficult to make look believable:

“two faces on his lumpen head, the features of both utterly distorted; eyes dislodged so they looked everywhere but ahead, mouths collided into a single gash, noses slits without bones. It was the face of a freak show foetus.” 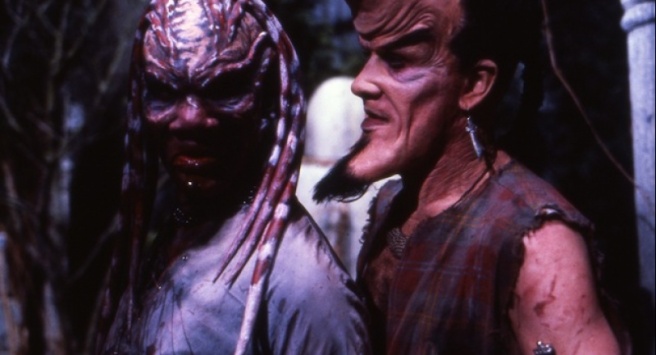 Nightbreed certainly has its flaws, and though I’m keen to see it (someone please release a UK Blu Ray!) I’ve no doubt the Directors Cut doesn’t fix them all. But it shows that even a 100 minute film is not enough to portray in depth a world created in fewer than 300 pages.

Barker’s fictions, being primarily set in our own world (Abarat apart), neither have nor require maps: the topology of his worlds is of secondary importance. Cabal is set in Canada, and Midian’s location is the deliberately vague “east of Peace River, near Shere Neck, north of Dwyer”. Peace River exists but beyond that the necropolis is in the imagined wilds of Alberta. A motif in Barker’s 1991 novel Imajica (an epic in scope as well as in size) is the lack of an authoritative map, a lack which that book’s troubled hero, Gentle, intends to fix. But, crucially, we are not given one ourselves with which to orient our journey across the Dominions.

And that’s a good thing.

I’ve nothing against maps. I got over-excited about OS maps in one of my previous posts, and in my adolescent years Tolkien’s maps of Middle Earth were, as they were for thousands of others, something to pore over and let the imagination wander across. But a map says that everything can be known, when it can’t. I’m with China Mieville on this:

“If you don’t know what’s on a map in the real world, how can you possibly fill one in in a world that doesn’t exist? It’s meaningless. Leave things unknown. With The City & the City, one of the things that fascinated me was the number of people who criticized it on the grounds of wanting to know how the cities got like that. Personally that has no traction for me as a reader, partly because I like mystery—I like not understanding things in the books that I read. But also because—and I know we’re not talking about the real world—it’s an equivalent question to asking, “How did London come to be?” “Why is Budapest like that?” It’s a question that demands such an amount of history that the weight of totality is so great that you can’t possibly answer it. Totality evades our complete understanding, not because the world is unknowable, but because there’s so fucking much of it.

For all those reasons, I think one of the most important things in world creation is to leave certain things unsaid. I think there’s nothing wrong with frustrating your readers about that. I don’t think there’s anything wrong with pissing them off at all, as long as they’re interested.”(4)

The time has come to declare an interest. I’m writing a fantasy novel, which will likely run to around 300 pages for all the reasons above but also, without wishing to make a virtue out of a necessity, I have relatively little time available for writing. I dread to think how long writing anything longer would take: this one has already taken 3 years and I’m still some way off finishing.

6 thoughts on “In praise of brevity: Clive Barker’s “Cabal” and the anti-epic”