I’ve written about maps in fantasy fiction before. For every reader who enthuses and pores over a double-page spread of spidery waterways and jagged mountain ranges, there’s another whose heart sinks at the OCD-level of detail, the neatness of it, the aura of omniscience.

I’m currently reading “Passing Time” (l’emploi du temps) by Michel Butor. It details – and the word is important – a year in the life of Jacques Revel, a French clerk spending time working in an office in the grim north English town of Bleston (modelled on Butor’s own stay in Manchester). The map in the frontispiece (below) was, when I first opened the book, a revelation. 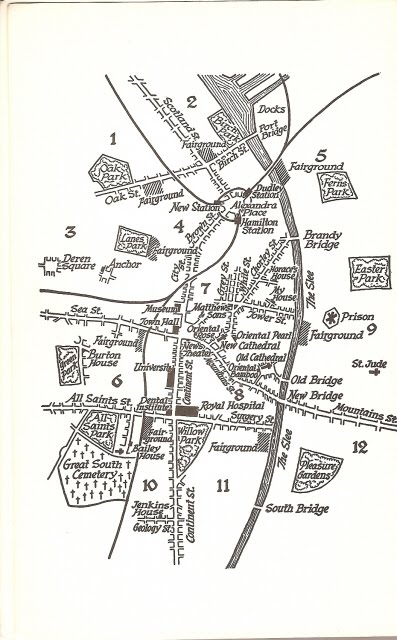 This is a map of Bleston, but not a map you’d find on sale in newsagent and bookshops, far less on your phone. It’s a subjective map; it shows only those streets and landmarks that Revel is familiar with. Anything he doesn’t know – and the town exists as a dark, unknowable mass in the novel – is simply not there. Unnamed streets lead off known routes, but no more of their shape is depicted than what the casual glance would register in passing.

Isn’t this how we carry cities in our heads? Not, perhaps, as we walk the streets, but if asked to give directions from one point to another, something like this is what we’d draw.

The novel I am currently writing is set largely on an island city-state. This island is divided into six administrative areas. Only five of these are named in the course of the book. What’s the other one called? Well, if it’s not in the story, does it matter? If none of the characters has cause to go there, or even to mention it, why specify?

For a while I swithered over the idea of even making a map. I have sketches – long pre-dating this version of the novel – which lay out in the most basic terms what the city looks like geographically, and how the areas are split. If I was to provide a map, I decided, it would be as vague and incomplete as my own knowledge of the city: partial, and contingent on the story’s demands.

So, the map I am creating is inspired by Butor’s, which has given me the confidence to build such an unreliable artefact. It has gaps: more gaps than details; it has names: but only those that are in the story.

I used to enjoy – what child didn’t? – drawing my own maps when I was younger, arbitrarily plonking down geographical features in the most unlikely (and unrealistic) of places. But there is something about the process that is too, well, neat. The conscientious author will want to create their map just so, an attitude which carries within it more than a hint of narcissism. I wanted to resist that, so I have bought a bundle of old streetmaps (those from the 1980s are best, before streetmaps become hyper-colourized). Scissors, correction fluid (to remove the street names) and glue mean I can cut & paste to make a collage map. My topography will be arbitrary but realistic and, to an extent, beyond my control. The city docks, for instance, will not be as I would draw them. Instead they’ll be what a hybrid of (say) Aberdeen and Dundee’s docks would be. I’m not copying existing streets, just appropriating their 2-dimensional shape and their spatial relationship.

The design will be guided by the text but at this first-draft stage there are paragraphs I’ve written which are set in surroundings that I haven’t fully visualised yet. The map can therefore also provide the setting and act as a spark to my imagination for when the time comes to rewrite. Oh look, I’ve got a bridge here; or a church.

This isn’t the first time that 1950s postmodernist French fiction (the nouveau roman) has fed into my current novel, but it’s the most fun.

One thought on “The mapping problem”